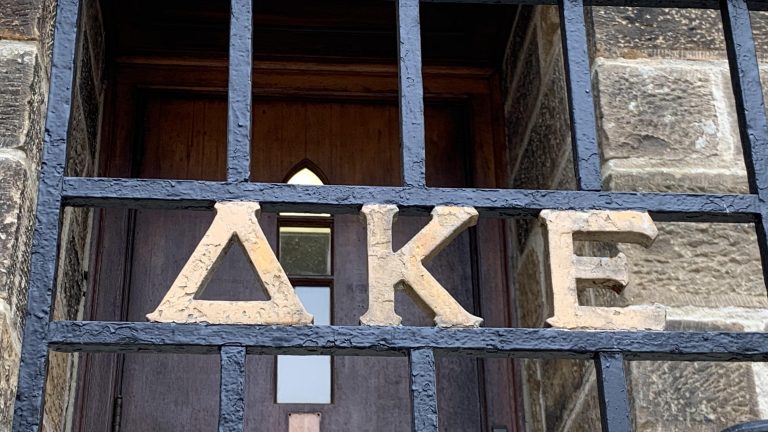 courtesy of The Kenyon Collegian

After postponing the vote, Student Council voted 5-2, with three abstentions, to approve the reinstatement of the Delta Kappa Epsilon (DKE) fraternity at its final meeting of the semester on Dec. 6. The group’s approval means that DKE is once again an active organization on campus and can recruit new members.

Following an investigation in the spring of 2018, DKE was suspended for either a period of four years or until spring 2020, when all the active members at the time had graduated.

The approval from Student Council concludes a long reinstatement process for the DKEs, which began in December 2019, when Greek Council approved a request to begin petitioning for reinstatement. Greek Council did not approve the group’s initial petition in January but voted to approve a revised version in May. The DKE petitioners then met with Student Council on Nov. 22.

During that meeting, members of Student Council expressed concerns about the organization’s new member education process and Title IX policy. To address these concerns, the group met with Civil Rights and Title IX Coordinators Samatha Hughes and Kevin Peterson, according to petitioner Andrew Kotler ’21.

In preparation for the Dec. 6 meeting, the petitioners also submitted their revised constitution to Student Council for review. According to a document distributed to Student Council members before the meeting, the petitioners had amended several articles, as requested by administrators and the Council. The chapter’s constitution now explicitly prohibits hazing practices such as branding, requires that all members receive both Green Dot and Title IX training each year and outlines a detailed process for reporting any potential Title IX violations.

The organization has now entered a standard, one-year probationary period during which it will be subject to provisional check-ins. This means that Student Council can call upon the DKEs to provide updates about how the fraternity is fulfilling the requirements necessary to regain full recognition from Student Council and from the College, Student Council President Bradley Berklich ’22 said. No further restrictions will be applied to the organization during this probationary period, Council members said.

Overall, the petitioners were elated about their petition’s approval and the full reinstatement of their organization. As an active Greek organization, the fraternity will be free to begin recruiting next semester.

“We are really excited about passing the Student Council vote and being reinstated as an organization on Kenyon’s campus. We are looking forward to working with other organizations, Greek and non-Greek, to help make an impact on Kenyon’s campus and the surrounding community,” the fraternity wrote in an email to the Collegian. “We are also really happy that our petition process has led to Greek Council task forces and Greek organizations taking a deeper look at what should be changed and added to Greek constitutions.”